Emergency Communications: Broadband and the Future of 911 Linda K. Moore 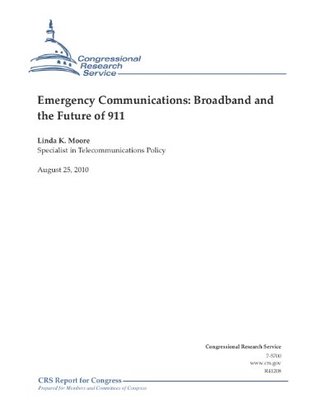 Today’s 911 system is built on an infrastructure of analog technology that does not support many of the features that most Americans expect to be part of an emergency response. Efforts to splice newer, digital technologies onto this aging infrastructure have created points of failure where a call can be dropped or misdirected, sometimes with tragic consequences. Callers to 911, however, generally assume that the newer technologies they are using to place a call are matched by the same level of technology at the 911 call centers, known as Public Safety Answering Points (PSAPs).

However, this is not always the case. To modernize the system to provide the quality of service that approaches the expectations of its users will require that the PSAPs, and state, local, and possibly federal emergency communications authorities invest in new technologies. As envisioned by most stakeholders, these new technologies—collectively referred to as Next Generation 911 or NG9-1-1—should incorporate Internet Protocol (IP) standards.

The same network can also serve wireless broadband communications for public safety and other emergency personnel, as well as other purposes.Recognizing the importance of providing effective 911 service, Congress has passed three major bills supporting improvements in the handling of 911 emergency calls. The Wireless Communications and Public Safety Act of 1999 (P.L. 106-81) established 911 as the number to call for emergencies and gave the Federal Communications Commission (FCC) authority to regulate many aspects of the service. The most recent of these laws, the NET 911 Improvement Act of 2008 (P.L.

110-283), required the preparation of a National Plan for migrating to an IP- enabled emergency network. Responsibility for the plan was assigned to the E-911 Implementation Coordination Office (ICO), created to meet requirements of an earlier law, the ENHANCE 911 Act of 2004 (P.L. 108-494). Authorization for the ICO terminated on September 30, 2009. ICO was jointly administered by the National Telecommunications and Information Administration and the National Highway Traffic Safety Administration. Legislation has been introduced that would create an “improved” ICO to focus on advancing the fundamental policy goal of creating an IP-enabled emergency communications network (H.R.

4829, Representative Eshoo and S. 3115, Senator Klobuchar). The recreated ICO would be established for five years under the direction of the NTIA.The FCC has included recommendations for advancing NG9-1-1 as part of the National Broadband Plan it presented to Congress on March 16, 2010. It has proposed that the FCC take on an expanded role in assuring that NG9-1-1 services meet future consumer expectations for broadband-based communications. Congress may evaluate whether additional actions are needed on its part in order to support a cohesive policy for transitioning to NG9-1-1.Other types of citizen-activated emergency calls are handled in call centers.

Increasingly many calls for assistance are placed by dialing 211. The number has been provisionally designated for community information and referrals. Service levels and response times for 211 calls would benefit from a transition to IP-enabled networks and in many cases could share infrastructure with 911 networks.

Comments
Comments for "Emergency Communications: Broadband and the Future of 911":