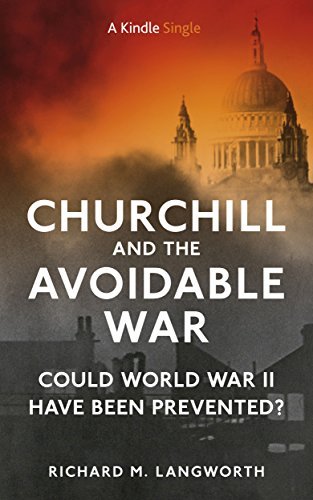 Churchill, 1948:World War II was the defining event of our age—the climactic clash between liberty and tyranny. It led to revolutions, the demise of empires, a protracted Cold War, and religious strife still not ended. Yet Churchill maintained that it was all avoidable. Here is a transformative view of Churchill’s theories, prescriptions, actions, and the degree to which he pursued them in the decade before the war. It shows that he was both right and wrong: right that Hitler could have been stopped- wrong that he did all he could to stop him.

It is based on what really happened—evidence that has been “hiding in public” for many years, thoroughly referenced in Churchill’s words and those of his contemporaries.Richard M. Langworth began his Churchill work in 1968 when he organized the Churchill Study Unit, which later became the Churchill Centre. He served as its president and board chairman and was editor of its journal Finest Hour from 1982 to 2014. In November 2014, he was appointed senior fellow for Hillsdale College’s Churchill Project. Mr. Langworth published the first American edition of Churchill’s India, is the author of A Connoisseur’s Guide to the Books of Sir Winston Churchill, and is the editor of Churchill by Himself, The Definitive Wit of Winston Churchill, The Patriot’s Churchill, All Will Be Well: Good Advice from Winston Churchill, and Churchill in His Own Words.

His next book is Winston Churchill, Urban Myths and Reality. In 1998, Richard Langworth was appointed a Commander of the Most Excellent Order of the British Empire by HM The Queen “for services to Anglo-American understanding and the memory of Sir WinstonChurchill.” For more information visit richardlangworth.com.

Comments
Comments for "Churchill And The Avoidable War: Could World War II Have Been Prevented? (Kindle Single) (B017HEGQEU)":